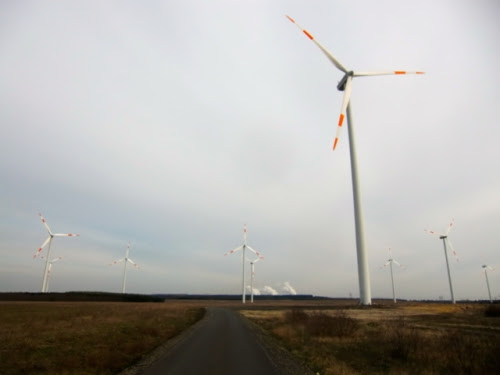 A landscape of wind turbines in the Niederlausitz. In the background, the chimneys of Jänschwalde powerplant
by Ares Kalandides
Every planning process has its own particular logic, which depends both on the culture it is embedded in and the particularities of the project. Today, I would like to reflect upon a process I have been involved in for the past 15 months or so, which is now coming to a close: a Regional Development Concept (REK) for a part of the Niederlausitz area in northeast Germany. An  interdisciplinary team of almost ten people worked in identifying new development potentials for an area with serious structural issues. After analyzing  several aspects of the region, demography, economy, culture, environment,  the group proposed a strategic development plan to foster growth potentials that included economic, touristic and leisure-oriented activities*.
My aim here is not to give a detailed acount of this work, but to point out several issues that turned out to be serious challenges in the process, hoping that I can share my concerns with others:
Read more of this post
at January 24, 2013
Email ThisBlogThis!Share to TwitterShare to FacebookShare to Pinterest
Newer Post Older Post Home