Me at Correio do Minho

at November 24, 2010
Email ThisBlogThis!Share to TwitterShare to FacebookShare to Pinterest
Labels: Me at Correio do Minho

If this business were split up, I would give you the land and bricks and mortar, and I would take the brands and trade marks, and I would fare better than you.
John Stuart, chairman of Quaker (ca. 1900) in Lindemann, 2003
at November 13, 2010
Email ThisBlogThis!Share to TwitterShare to FacebookShare to Pinterest
Labels: John Stuart

Foreign trade and its importance in the economy of Iran in the international sanctions context: focus on the unilateral United States sanctions
Eduardo Oliveira*
School of Social Science |University Sains Malaysia
School of Economics and Management |University of Minho

Iran is one of the world’s most closely watched nations as a historical entity, about 2.500 years ago, of the Achaemenids Dynasty (559 to 330 BC) period. The Islamic Republic of Iran (denomination after the revolution in 1979), also know as Persia territory, as historical entity and despite political, religious, and historic dimensions of the society, Iranians maintain a deep connection to their past. The Iran’s economy is a mirror of the International Community nowadays.
Economic policies and decision-making process in economic terms are guests from the international sanctions, particularly the unilateral sanctions from United States of America, which accuse Iran of supporting international terrorism and maintain the nuclear programme as global weapons. Kinzer et al. (2005: 61) wrote about the impact of sanctions against countries, he said “this isolation has hampered the short and long term growth of its markets, restricted the country´s access to high technology, and impeded foreign investment”. A form of foreign pressure, sanctions are typically meant to alter the policies of other countries. There is much pessimism on whether they ever work.
The main question, related with this working paper, and we should do is how Iran can trade in the economic global arena, in the contemporary global markets in the sanctions context? Can we found true economic policies in this context and with the contemporary conservative politicians, with the leadership of Mahmoud Ahmadinejad, since 2005? Can the economic sanctions destabilize the Iran government, the target of the International Community?
Understand the political economy, especially the foreign trade and the impact of the international sanctions in the economy of Iran is the purpose of this paper, with special focus on the United States sanctions, in the line of Marinov (2005). We using the electronic database of The World Factbook published by Central Intelligence Agency (CIA), The Statistical Centre of Iran, World Trade Organization, United Nations and European Union, and a qualitative research based in published academic work until 2003.
Key-words: International community; International sanctions; Impacts; Foreign trade; Iran;

As anyone who follows this blog already knows, at IIR’s The Market Research Event (TMRE) in San Diego next week on Tuesday November 9, NGMR will present the first annual “Disruptive Innovator” awards celebrating progress-by-force in research.

Change isn’t easy for anyone, but researchers seem to have a particularly difficult time with it.

Let’s face it: for an industry and profession that purports to help clients achieve competitive advantage by enabling them to understand and anticipate unmet consumer needs, to change ahead of the times - not simply with them - and to move the needle proactively, market research often stumbles when it comes to walking the talk ourselves.

Research is obsessed with control; it’s in our DNA. But to paraphrase comments blogged by IIR’s Marc Dresner on Tuesday, to compete and stay relevant these days depends on how proficiently we can adapt when we’re forcibly removed from our comfort zone. Marc also noted that practice makes perfect, and in this respect, research needs a lot of practice.

I founded Next Gen Market Research because I truly believe that research needs to redefine and reinvent itself continuously, and this requires some significant changes to our industry’s culture.

So it made sense to me to celebrate those brash and brazen enough to challenge the status quo, those with the temerity to disrupt business as usual in the name of progress.

I’m talking about the people and organizations that the “establishment” often derides. The ones who break the rules, who aren’t “officially” recognized by and are denied entry into our “club” by organizations that fancy themselves the arbiters of legitimate research practice and policy.

Hence, with the support of like-minded, next generation market researchers, we established the NGMR Disruptive Innovator awards.

I knew this would ruffle a few feathers, and if it didn’t, then I would’ve considered it a failure. But I had no idea we would get so many nominations and that picking the winners would be so difficult. Apparently, there are many more revolutionaries in this industry than I thought.

In hindsight, I should’ve expected no less. Surely the self-imposed rulers with the megaphones don’t speak for everyone? In fact, I’m willing to bet they’re a very vocal minority. That’s why I’m grateful to have a true, egalitarian industry platform like TMRE to present this award for the first time - unencumbered by the politics of entrenched interests.

My thanks also to NGMR’s Global Advisory Board for winnowing down our finalists, who have been divided into three categories based on the number of nominations we received for each group. And for their help in the selection of our winners.

Without further ado, I’m deeply gratified and proud to present to you the new majority. Please join me in applauding the finalists for NGMR’s 1st annual Disruptive Innovator awards:

"
at November 07, 2010
Email ThisBlogThis!Share to TwitterShare to FacebookShare to Pinterest

Are you young and talented? Interested in B2B research? Want to prove it?

Are you young and talented? Interested in B2B research? Want to prove it?: "

I am putting together a project for next year’s BIG Conference. At this stage we are looking for a group of under 28s to look into two questions:1. What is happening with social media in the B2B area?2. What are the business opportunities for market research companies to use social media to help B2B clients?The team will work together between now and the BIG Conference in May with a view to sharing their findings with the Conference attendees. We are not prescribing how the project should be conducted, nor are we saying how the information should be shared, that is for the group to determine.

We already have a couple of volunteers, but we are looking to expand the group. The core members of the group (three or four) will have one day and one night’s attendance paid for them – however, we are looking for a wider number of people to be involved in conducting the project.

Yes, we are looking for researchers, but we are also looking for other complementary backgrounds, i.e. from anybody who thinks that they can shed some light on what is happening and what the market opportunities are.

To shout out your interest, email ray.poynter@thefutureplace.com making a case to be included – before November 13th.

Please note the aim is not simply to create a conference presentation, we are looking to produce useful insight into how the MR industry can leverage social media to help B2B clients.

"
at November 07, 2010
Email ThisBlogThis!Share to TwitterShare to FacebookShare to Pinterest

Far from the meddling crowd

Territories, Brands and Competitiveness: The Minho region and its international promotion

Territories, such as countries, regions and cities, compete with other geographical areas in order to attract investments, markets, businesses, residents, tourists, talents and entrepreneurs, as well as the hosting of cultural and sporting events.
This process is intensified with the growth of internationalization and globalization. These territories need to identify the opportunities and strengths to achieve competitive advantages for efficient access to markets, resources and people. A clear definition of place branding, developed in a consistent, cooperative way with stakeholders and as a product of a cooperative network between local, regional and national stakeholders, can promote the production base, increasing the touristic and human resource flows. Investors, citizens of different nationalities, students and researchers take part of this flow. Place branding is a new trend in marketing and territorial or destination marketing research. Place branding is a powerful tool available to academics and professionals who dedicate their research to promoting geographical units in place management. Place branding is an important concept in today’s competitive world when nations are competing for tourists, consumers, donors, immigrants, the media and governments of other countries.
The aim of this master’s thesis is to understand how the social and economic agents or place stakeholders should coordinate the activities to increase competitiveness and reputation in a context of internationalization. In this case study we applied seven semi-structured interviews to seven different economic and social stakeholders of the Minho region, northeast of Portugal.
The interview guide has been prepared keeping in mind the determinants of competitiveness of Michael Porter, and according to the six dimensions of The Nation Brand Hexagon of Simon Anholt, an index to measure the power and appeal of the image of countries as brands, here adapted to the Minho region. We summarize the main results of the interviews with one SWOT analysis. The results indicate that the Minho region should seek to attract foreign investment, bearing in mind the availability of excellent infrastructure and facilities for teaching and research, promoting itself as a region of knowledge and innovation.
Key-words: Marketing, Brands, Network, Territory, Competitiveness, Minho region.
Master thesis author: Eduardo Oliveira
Institution: School of Economics and Management, Univeristy of Minho
Advisors: Professor José Carlos Pinho and Professor Cláudia Simões
Searching for job -> my CV -> http://eduardoo.pt.vu/  (CV of Eduardo Oliveira.pdf at Academic works)
at November 02, 2010
Email ThisBlogThis!Share to TwitterShare to FacebookShare to Pinterest
Labels: Master thesis abstract 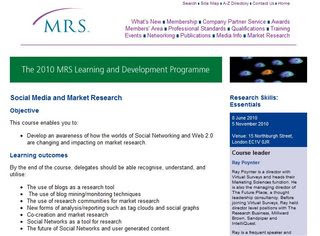 The MRS is re-running my Social Media Workshop on November 5th, at their London offices and there are spaces available.

I will be giving away a free copy of The Handbook of Online and Social Media Research to one lucky attendee.

We have two additional speakers at the course, Marilyn Reardon from Virtual Surveys and Phil Burgess of FreshMinds.